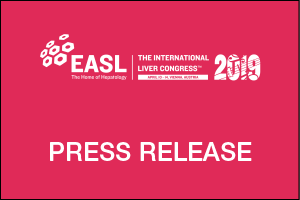 ILC 2019: ‘Real-world’ studies report the activity and safety profiles of nivolumab and pembrolizumab to be in line with those observed in hepatocellular carcinoma phase II clinical trials

EUROPEAN ASSOCIATION FOR THE STUDY OF THE LIVER (EASL)

13 April 2019, Vienna, Austria: ‘Real-world’ studies conducted in Spain, Austria and Germany have reported activity and safety data for nivolumab and pembrolizumab in the treatment of hepatocellular carcinoma (HCC) that, according to the investigators, are in line with those observed in the phase II clinical trials. The studies reported today at The International Liver Congress™ 2019 in Vienna, Austria, found that these two immunotherapies were active and well tolerated even in heavily pretreated individuals and those with Child–Pugh class B (moderate) liver disease.

Hepatocellular carcinoma (HCC) is the most common primary liver cancer, with more than half a million people worldwide diagnosed with the condition each year.1 Treatment options for early-stage HCC include ablative procedures, surgical resection, and liver transplantation and other options such as locoregional treatments and systemic therapies improve the overall survival of patients with intermediated or advanced HCC.2 Immunotherapy with the checkpoint inhibitors, nivolumab and pembrolizumab, could represent a relatively new approach to the treatment of HCC.3–6 Nivolumab and Pembrolizumab have a conditional approval in the USA for the second-line treatment of individuals with HCC who have previously received a tyrosine kinase inhibitor.5 The details of the Phase 3 study of pembrolizumab in the second-line treatment of advanced HCC will be presened soon, but it was recently announced that the primary endpoints were not met.7

Results from ‘real-world’ studies with immune checkpoint inhibitors in the treatment of HCC have only recently begun to emerge, 8,9 and more data are needed.2 In the first ‘real-world’ study presented today, the records of 42 individuals with HCC who received nivolumab outside clinical trials in Spain. In this cohort, almost all patients received nivolumb as second-line (n=20, 47.6%) or third-line (n=15, 35.7%).

Fifteen (46.8%) individuals reported 25 AEs, of which five were Grade 3–4 and only one was Grade 5 (rejection after liver transplantation). Corticosteroids were required for the management of AEs in five individuals (15.6%).

‘This study suggests that the safety profile of nivolumab when used in clinical practice is in line with that reported in clinical trials despite including patients outside of clinical trials,’ said Dr Leonardo Gomes da Fonseca from the BCLC group at the Hospital Clinic of Barcelona, Spain. ‘The survival data must be interpreted bearing in mind that some patients had not progressed prior to receiving nivolumab and the overall patterns of progression were heterogeneous.’

‘Immunotherapy with nivolumab or pembrolizumab was well tolerated in patients with advanced HCC, including those with Child-Pugh stage B disease and those who had been heavily pretreated,’ said Dr Matthias Pinter from the Medical University of Vienna, Austria. ‘Efficacy was comparable to that reported in Phase 2 studies.’

Abstract: A multicentric study on real-life impact of nivolumab in patients with hepatocellular carcinoma (PS-137)